It’s been almost two month’s since we ate at The Public Kitchen & Bar during our trip to Savannah, but I can still remember the delicious food like it was yesterday. The restaurant describes itself as “Contemporary Fresh American fare coupled with a sophisticated, mid-century modern decor”, which is pretty spot on.  It took us a while to decide what restaurant would have the honor of our only dinner in Savannah, but after reading a lot of Yelp reviews, we ended up at Public Kitchen & Bar and it did not disappoint.

We arrived around 7pm and put our name in, the wait was about 45 minutes, which worked out perfectly since it gave us time to run back to our hotel and drop off the bags of stuff we had bought at the Savannah Bee Company. By the time we got back, our table was ready. We started off by ordering drinks. They have some  craft beers on tap, but only a few were local beers. After sampling 1 or 2 beers, we picked a local beer and started looking over the menu. As soon as we saw that we could order a half of the Cheese Board we knew what we were going to get for an appetizer. The half size came with a choice of two cheese (out of the 4 offered) along with a cranberry compote, house spicy pickles, and bread. The portion size was perfect for two people and the pickles perfectly complimented the manchego we had ordered while the cranberries worked great with the brie. 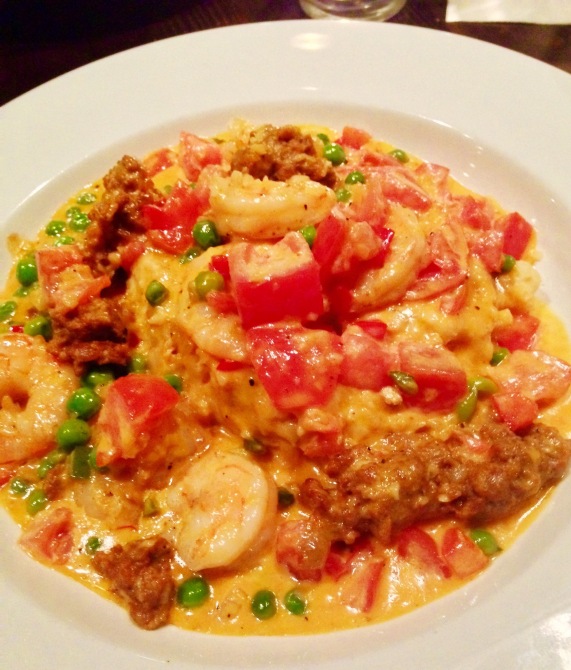 By the time we finished the Cheese Board we were getting pretty excited about our entrees. After observing the plates being brought to the tables around us, I decided to order the Shrimp & Grits and Tori ordered the Shrimp Linguini.  I must say I was a bit nervous about ordering the Shrimp & Grits, because I wasn’t sure anything could beat the ones I had at Hominy Grill a few days before, but I had nothing to worry about. Public’s take on Shrimp & Grits was completely different. Instead of larger grits these were small and surprisingly fluffy and covered in a bacon cheddar sauce. The shrimp was perfectly cooked and when paired with the chorizo, peas, tomato, & sherry cream the result was a great Tex Mex type flavor.

Tori’s Shrimp Linguni contained sun-dried tomatoes, red onion, and zucchini all in a sherry cream cheese sauce. Cooking pasta to perfection isn’t an easy task but The Public Kitchen nailed it. The cheese sauce wasn’t over oily like some sauces can get and there was hints of garlic that went great with the shrimp. It was definitely a dish worth ordering again.

Even though their desserts looked and sounded great, we were so stuffed by the time we finished our meals that we just couldn’t eat a single bite more. We definitely look forward to checking out Public’s latest seasonal menu the next time we visit Savannah!

One thought on “Eat Here: The Public Kitchen & Bar”