When we were planning our trip to Charleston, we asked a lot of friends where the best places to eat were. There was only one restaurant that made it on every list – Hominy Grill. Obviously, we knew that we needed to check it out and so we decided we’d go there for breakfast our first morning in Charleston. We arrived around 9am on a Monday and were told the wait would be about twenty minutes but that we could grab drinks from the window in the court yard area while we waited. 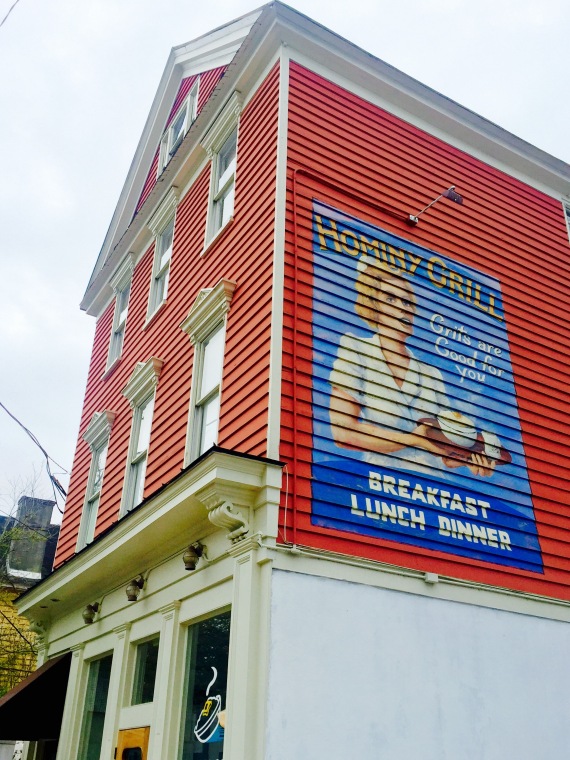 Tori was just about to order her coffee when they called our name. Excited our twenty minute wait had only been about three, we went to our table. The restaurant itself has the feel of grandma’s kitchen and is so incredibly homey! From the second we met our waiter, we knew this was going to be a good morning. He was full of energy and super nice. Based on reviews, we had already decided we were going to try the “Nasty Biscuit” and Shrimp & Grits so we ordered right away. Our dishes came out so fast that Tori had only had a chance to take a sip or two of her coffee. It was just about as fast as any New Jersey diner. Our expectations were pretty high for the food after reading all the rave reviews, and we were not disappointed at all. I don’t think it’s possible to go wrong with a biscuit topped with fried chicken and smothered in sausage gravy, but Hominy Grill took it to a whole new level.  The biscuit was buttery, the chicken was moist and the gravy wasn’t pasty like a lot of gravies can get.

The shrimp & grits also lived up to its reputation. Having never tried shrimp & grits, we weren’t quite sure what to expect, but we were still super impressed. The grits were coarse ground which gave the dish a great texture and the shrimp were perfectly cooked. Bacon, mushrooms, and scallions finished off the dish perfectly giving the dish a great savory flavor. The most surprising part of the dish, though, was how light it was. It was filling without weighing you down and definitely the perfect meal before a long day of sight seeing. 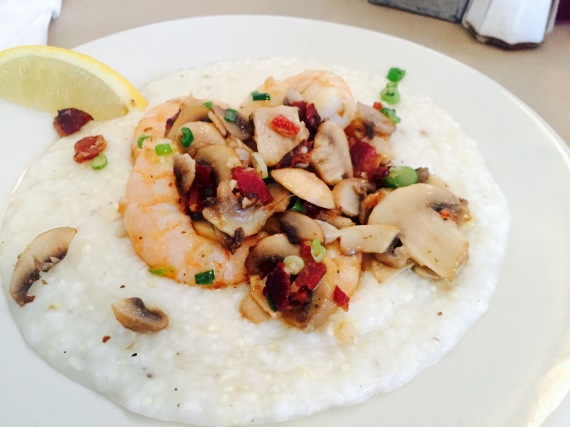 After we practically licked our plates clean, our waiter mentioned dessert. We had read one review where this woman went on and on about their chocolate pudding. I’ve eaten my fair share of chocolate pudding, usually the instant Jell-o kind and I really thought that’s how all pudding was. Well, my eyes have been opened to the great potential all pudding has now because that was hands down the best pudding I’ve ever eaten. It is denser than your standard pudding but the flavor is more like chocolate mousse. Plus, it’s topped off with fresh whipped cream so it really couldn’t get any better. 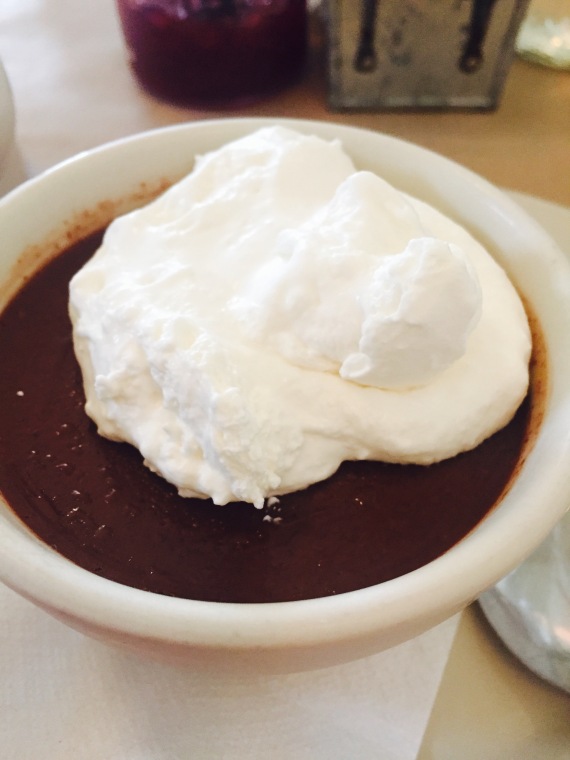 Obviously since there are two of us we needed to try two desserts and so we also got a slice of Carolina jam cake that had an incredible caramel glaze on it. I’m talking so good we asked to see their cookbook because if both the pudding and the caramel glaze had been in it, we definitely would have spent the $12.95 to purchase it (sadly it was not and so I will need to reverse engineer it from memory one of these days). The cake itself had an amazing flavor which went perfectly with the caramel glaze and fresh whipped cream.

Overall, we definitely agree with the James Beard Nominating Committee which has named Hominy Grill a 2015 Outstanding Restaurant Semifinalist. It goes without saying that Hominy Grill will be at the top of our list of restaurants to go to the next time we’re in Charleston, although maybe, we’ll give their dinner menu a try!