We ate at Craftsmen Kitchen & Tap House on the first Sunday of our Spring Break trip to Charleston & Savannah. We got there around 3:30pm for what we were calling a super late lunch. We had made reservations the night before just in case it would be crowded, but not all that surprisingly, not many people were eating at 3:30pm on a Sunday (although a few were hanging out at the bar).  After being seated, we immediately began perusing the drink list which our waiter was nice enough to walk us through (good thing since it was over 5 pages long). I decided to try out a beer flight of local beers while Tori tried a local pale ale. My beer flight was a pretty good deal at $12 for 4OZ pours of four beers made in the greater Charleston area. They also had three other flights highlighting beers of different styles and geographic areas.

Once we had picked our drinks, it was time to move on to food. It ended up being a lot easier than usual since we had spent some time the night before on Yelp and it was clear from the highlights that a few things on their menu were definitely the stars. We decided to start with two appetizers to split. The first was a Scotch Egg with 90-minute mustard and apple kraut. It was absolutely delicious which really surprised me since I never though an egg surrounded by sausage and deep fried would be something I would like.

Our second appetizer was Squid Fries with house cured bacon, pickled peppers, and lemon aioli. It was with out a doubt the most delicious and well cooked variation of calamari I have ever had. 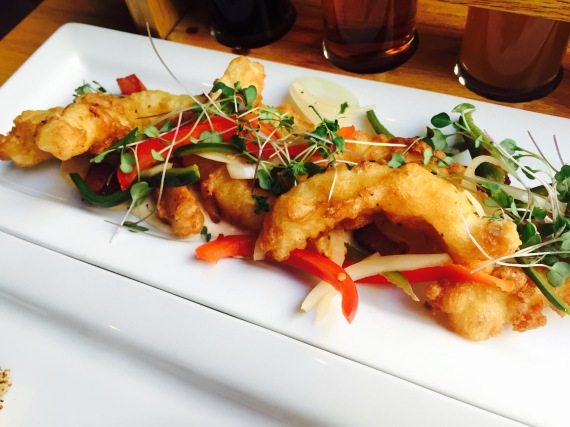 We rounded out our meal by splitting the Crunchy Dame which is their take on a croque monsieur made with pork belly, Gruyere, cherry jam, mustard aoili and a sunny side up egg, plus a side of potatoes. While this wasn’t Tori’s favorite, I thought the flavors worked really well together.

Next time though, we’ll probably stick to their Bar Classics and Street Food since they are a lot easier to share and it’s fun to try out new dishes!

We couldn’t help but ask about their desserts after our delicious meal. While originally we had wanted the chocolate stout cake, they had just run out of it and so we went with the apple crisp. It ended up being a fantastic choice. It was served in a small cast iron skillet and was the perfect size to share. The apple crisp was definitely the perfect end to our great meal at Craftsmen!

Overall, I’d say this restaurant will definitely be on our list to go back to next time we’re in Charleston since we know we can get reasonably priced local brews plus delicious food.  Maybe we’ll even be able to make it to one of their happy hours (Tuesday-Thursday) which tend to have more food than drink deals and goes from 7pm-1am instead of the typical 5pm-7pm.