As I’m sure you know by now, whenever I travel for conferences I always try to check out some of the local sights and breweries. My trip to Salt Lake City last November was no different. While it may be a bit surprising, there are actually quite a few breweries and microbreweries in Salt Lake City. Luckily, one of them, Uinta Brewing,  made the list of Top 50 Craft Breweries in America and so visiting it would give make it the 4th out of my goal of 10 before I’m 30, making it easy to choose which one to go to! After finding out which of my friends would also be potentially interested in going on a brewery tour, I emailed the brewery and asked if they would be able to give us a tour on Friday afternoon (typically they don’t offer tours on Fridays) since it would be our only free time during our trip. Thankfully, they were able to make an exception for us and we were all set!

Uinta Brewing isn’t in downtown Salt Lake City, but it’s just a short 15 to 20 minute Lyft or Uber ride if you are staying downtown. Since there were about 10 of us, we were able to cover our rides to and from by using new user codes on Lyft which was great! We arrived around 1:15pm to grab lunch at the Uinta Brewhouse Pub before our 2pm tour.

Our waitress  also turned out to be our tour guide and told us not to rush with lunch which worked out really well. We all ordered a beer to start out with and then picked out our meal. I have to say, I was surprised at how delicious the food was. It definitely wasn’t your typical pub fare. I started out with a Hyve Honey Ale, a golden ale with a hint of honey, which was perfect start to a conference weekend (and end to a morning of travel). For my meal, I went with the burger which was topped with roasted green chili mayo, lettuce, tomato, caramelized onion, and local beehive promontory habanero cheese. While the burger was definitely one of the better ones I’ve had, my choice of side, sweet potato tots, totally stole the show. The were crazy delicious and probably one of the best sides I’ve ever had! Another thing I really loved about the pub was the fact that they used beer bottles in fun ways like as salt and pepper shakers and a hot sauce bottle! 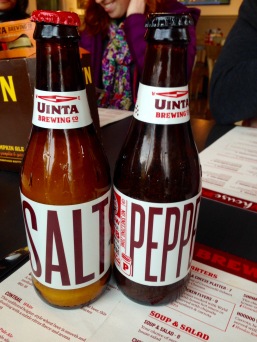 After we were all stuffed with the delicious food, it was time to walk some of it off on our brewery tour. They walked us through the whole brewing process while telling  us a little about the history of Uinta Brewing and how it’s expanded over the years. The tour took about 45 minutes and full of interesting facts, like all Uinta beers are named after things related to Utah and how the brewery is powered by 85% wind power and 15% solar power! The tour definitely falls into the top 5 tours I’ve been on!

While the tour doesn’t include free tastings, you can get 4oz pours for most beers for only $1 (high gravity beers are 2oz pours for $2). We decided to build our own flights to try out some more beers. While you can only have 2 – 4oz pours in front of you at a time due to Utah alcohol laws, our bartender was awesome and made sure to get our next pick as soon as we were done one of them. At the end of the day I was able to try quite a few of their brews. My favorites were Hazel, Golden Spike, and Hyve.

We ended our time at Uinta by stopping in their gift shop where I picked up a tasting glass which was perfect for my glass collection. Overall our trip to Uinta Brewing definitely exceeded expectations on all fronts. The food was delicious and unique, the tour was informative and interesting (which says a lot coming from a group of chemical engineers), and the beer had me looking up where they sell Uinta in New Jersey! If you’re heading out to Salt Lake City, you should definitely take some time to stop by!