With over 65 breweries in Portland proper alone, it’s no surprise that Portland is known for it’s craft beers. Since there were quite a few beer lovers in our group, we set out to try as many as we could and managed to visit close to a third of the list!

So what did we find? There are quite a few fantastic breweries, where you can not only get a number of delicious beers but also fantastic farm to pub food. While the good were really good, we came across just as many breweries where we couldn’t find a beer we were willing to finish (which is saying a lot coming from our group). Of course, there were even more breweries that fell somewhere in between the two extremes which had one or two beers that were above average. The biggest surprise, however, was how hard it was to guess based on reviews and recommendations which category a brewery would fall into. Needless to say there are quite a few breweries that were doing their best to Keep Portland Weird, that had a big local fan base, but we couldn’t quite wrap our head around their beers. I mean why would you want your beer to taste like a blueberry muffin? At the end of the day, we learned the importance of asking for tasters before ordering a full pint and managed to find 3 breweries that we all agreed were fantastic and worth multiple trips to: BridgePort Brewing, Ex Novo Brewing, & Burnside Brewing Company. It’s no surprise that BridgePort Brewing knows what they’re doing since they are Oregon’s oldest craft brewery. They are located in the Pearl District in a converted warehouse with exposed brick walls and a cool industrial feel. I recommend starting out with the flight where you’ll get to try 8 of their beers including all their core beers for under $10. It comes on a tray with descriptions of each beer which is great if you’re trying to learn what types of hops you like and which ones you don’t like I was. My favorite of the bunch was the Stumptown IPA which had a great balance of hops and an almost creamy finish. As far as food goes, you can’t really go wrong, but my favorite item on the menu was the Jordan’s Pork Chili Verde. It’s super filling and the perfect meal for a cold rainy Portland night. 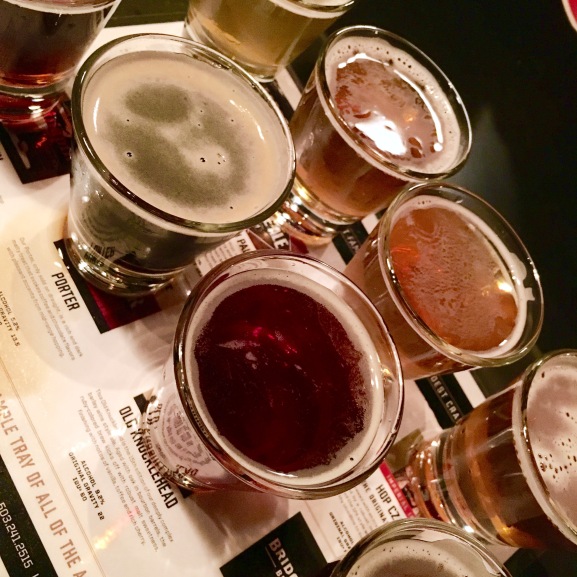 Ex Novo Brewing was the first brewery I checked out after landing in Portland and it did not disappoint. While it’s definitely on the small side, it has an awesome menu of interesting beers and it’s a non-profit so all the net profits go towards charities. While you can never go wrong with a flight, which is $6 for your choice of four beers, they also have a great Whiskey & Beer deal ($8 for a small beer of your choice and shot of whiskey) and a delicious stout milkshake. If you’re sticking to just beer, I really enjoyed The Most Interesting Mexican Lager, which is like a Corona but a million times better, and the Liquid Schwartz, a dark but surprisingly drinkable beer. Despite the fact that I’m not a huge fan of sour beers, their Sour Hop Kids (brewed with Sour Patch Kids) was surprisingly good. When it comes to food, I really enjoyed the Brewer’s Board which came with a few different types of cheese, meats, and crackers. 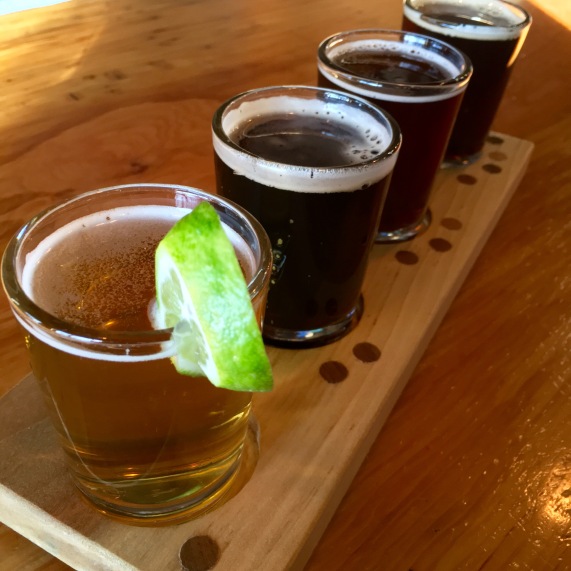 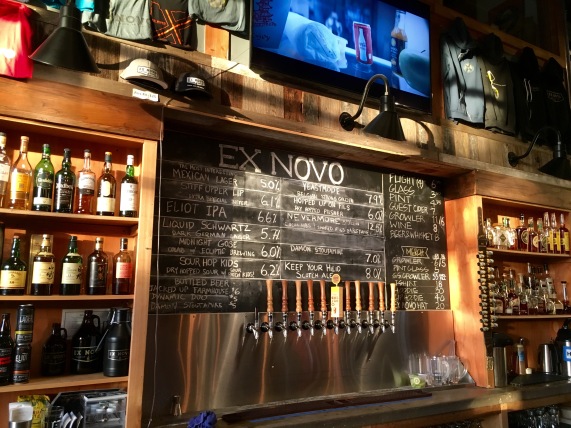 If there was an award for the best beer flight in Portland, it would definitely go to Burnside Brewing Company and their $15 18-beer flight. If you aren’t quite up to the challenge of 18 beers, they also have a 6 beer flight which includes all their core beers and a 12 beer flight of their current  seasonals (the 18 beer flight is made up of both). I have to admit that we managed to tackle their flights in both February and March and so we were able to try well over 30 of their beers. On the whole, their beers were good with a few that we really loved like the Duke of Earl Grey, Yammityville Horror Batch #666, and Too Sticky to Roll India Red Ale. While the beer would have been more than enough to keep us coming back, their food was also some of the best we had. The kitchen is located by the bar so you can watch them making your food (and check out what looks good) while you drink your beer. We tried quite a few items on the menu but the tacos and pork chops were two of my favorites. If you’re on a budget, be sure to check out their fermented hour (3-5pm for food & 3-6pm for beers) for some great deals like $7 burgers. 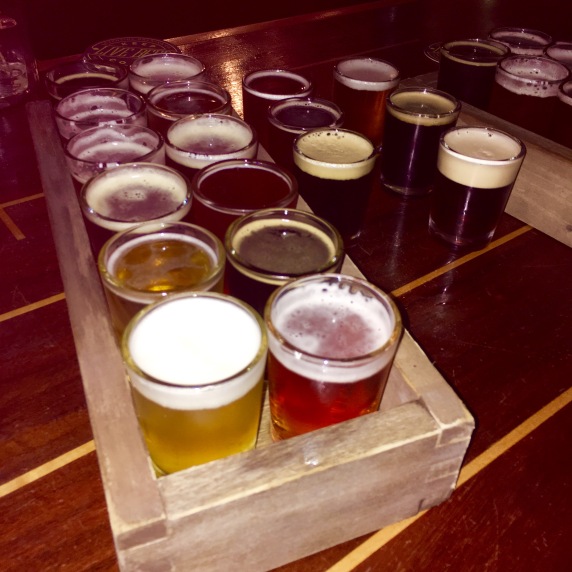 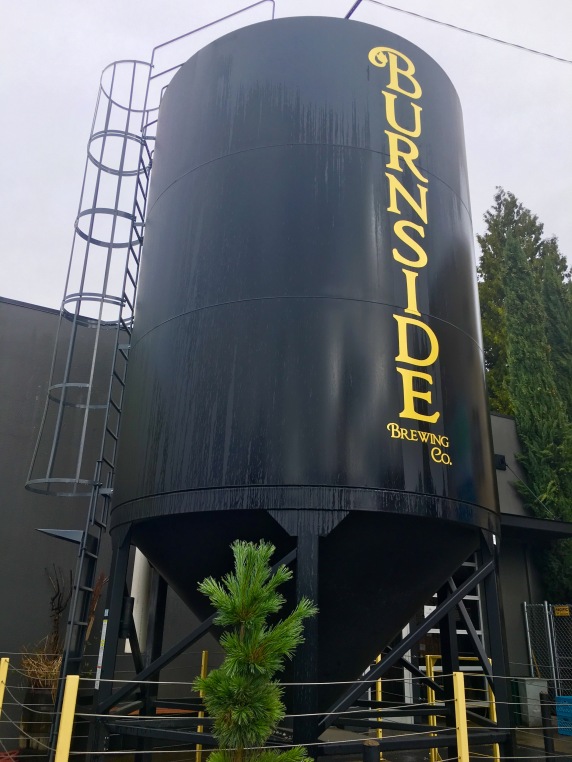 While it didn’t quite make our top 3 list, I would be remiss not to give an honorable mention to Alameda Brewing which not only introduced us to the delicious existence of stout milkshakes but also had our favorite bartender, Dave, serving up beers. Out of all of our bartenders and servers, Dave definitely spent the most time making sure we were taken care of, helping us figure out what beer we’d like, and keeping us laughing.

Did your favorite Portland Breweries make our list? If not let us know so we can check it out on our next trip!

Follow The Daily Soirée on WordPress.com
Join 168 other followers