Monday started off with another early morning bus, metro, & train ride, but luckily due to the high-speed train we took we made it to Florence a little before 11am. After checking in to our hotel and freshening up (this past week has been crazy hot and humid for September), we were off to the first item on our agenda…lunch. I’m always worried about picking out good restaurants when I travel since there is such limited time in a place and I want to make the most of it. So I was very happy that one of my friends gave me a list of her favorite places from when she studied abroad in Florence. Pretty high up her list was getting a panino at All’antico Vinaio. My L’Inferno panino was definitely worth the 20 minute wait in line. 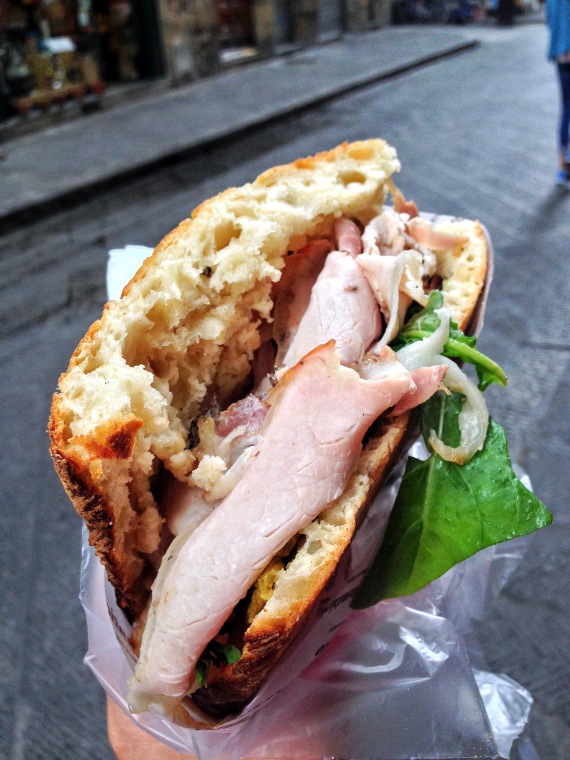 After we finished eating, we ducked into the Palazzo Vecchio where we were hoping to get tickets to the Secret Passageways tour. Unfortunately, the times we wanted were already sold out, but they recommended taking Dan Brown’s Inferno Tour which included a lot of the same things. We had a bit of time before the tour, so we headed over to Santa Croce. It was amazing to see not only the beautiful church, but also the graves of Italian greats like Michaelangelo and Galileo.

After a brief stroll through the leather school that is attached to Santa Croce, it was back to the Palazzo Vecchio (with a quick stop for gelato of course) for our tour. Having read Dan Brown’s Inferno, I absolutely loved the tour. We got to see everywhere Robert Langdon went in the Palazzo Vecchio and learn what really exists and what was made up. Plus, we got to see some secret passageways and see how the roof was constructed over the Room of the 500.

By the time our tour was over around 5 pm, we were exhausted and ready for some dinner. We found a place close to the bus back to our hotel that opened early and ate a quick dinner before turning in for the night to get a good night’s rest before our Tour of Tuscany.

By 8:15am on Tuesday we were already finished with breakfast, and waiting outside the train station to meet up with our Walk About Florence Best of Tuscany Tour. The moment we met our guide for the day, Antonella, we knew we had made the right decision. As we drove out of Florence and through Tuscany to our first destination, Sienna, she pointed out interesting points, gave us some basic Italian lessons, and explained some of the history of the area. Once we arrived in Sienna, we went on an hour long guided walking tour that covered everything from the oldest continually running bank to Piazza del Campo to Sienna’s Duomo. Between the tour and our hour of free time, I absolutely fell in love with Sienna. 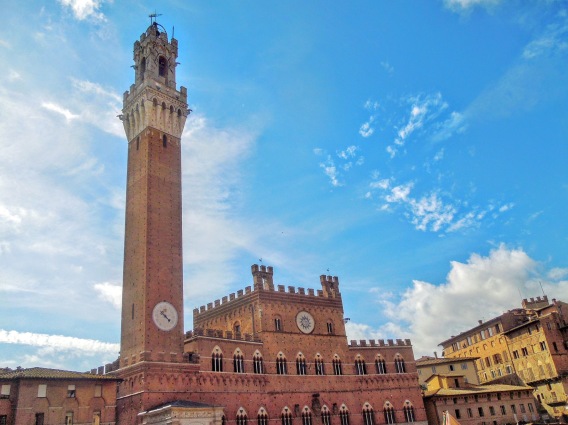 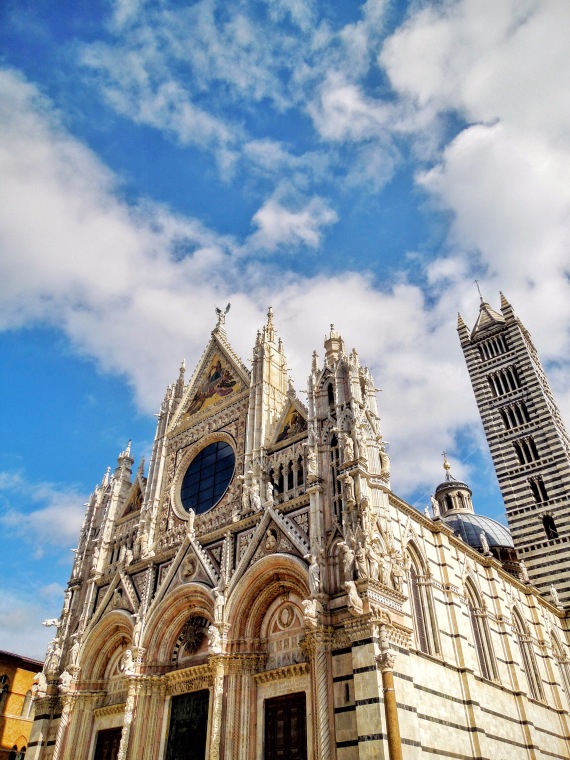 At about 11:30am, it was time to head out to our next stop, Fattoria Poggio Alloro, for lunch. The view from Fattoria Poggio Alloro was absolutely breathtaking and included rolling Tuscan hills and even San Gimignano. After a tour of their vineyard, wine making rooms, olive trees, and barn, it was time for a delicious lunch all made with ingredients from the farm and paired with their wine. It was the perfect relaxing break after a busy morning. 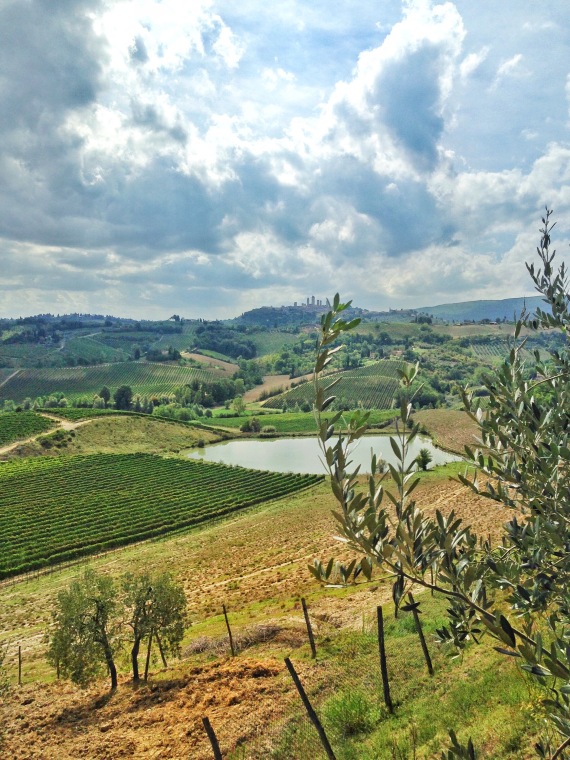 Lunch flew by and the next thing we knew Antonella was telling us it was time to head back to the bus to make the 10 minute drive to San Gimignano. After making sure we all knew which gelateria had won the title World’s Best Gelato in 2009 (hint…their name is not World’s Best Gelato) we were given about an hour and a half of free time to explore. We, of course, started off with gelato and then explored the town including climbing up to Parco della Rocco to get a great view of the city and the surrounding area. 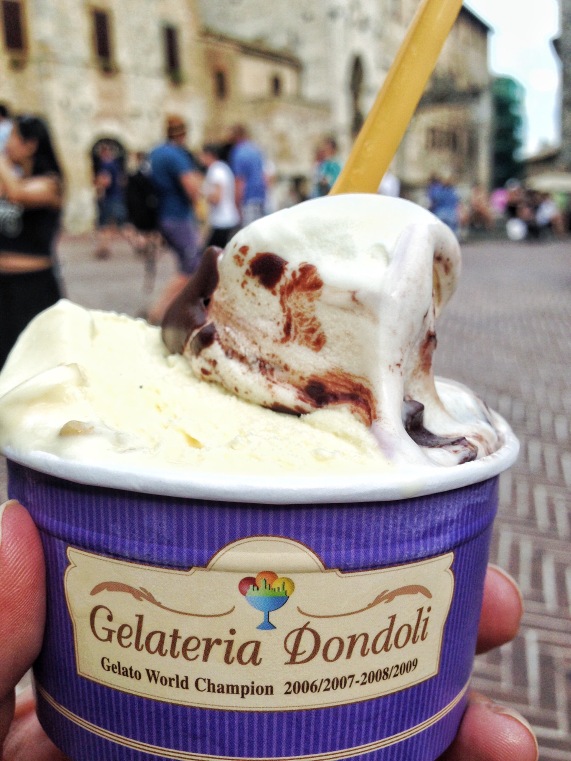 With most of our tour complete, there was only one more stop left…Pisa. We had a fairly long bus ride to regain our strength before we made it to the Field of Miracles. Even though there was an option to add climbing the tower to our tickets, we had opted against that and so we spend our time enjoying the beautiful architecture of not only the tower, but also the church and baptistery and doing a bit of souvenir shopping. By 7:15pm we were taking the scenic route back through Pisa to see a bit more before heading home. By the time we got back to Florence, we were exhausted, but too hungry to skip dinner and so we headed over to Eataly on the second floor of the Mercato Centrale on the recommendation of Antonella. I opted for a gnocchi & mushroom dish and we enjoyed a relaxing, but quick (at least by Italian standards) meal at Tosca before calling it a night. 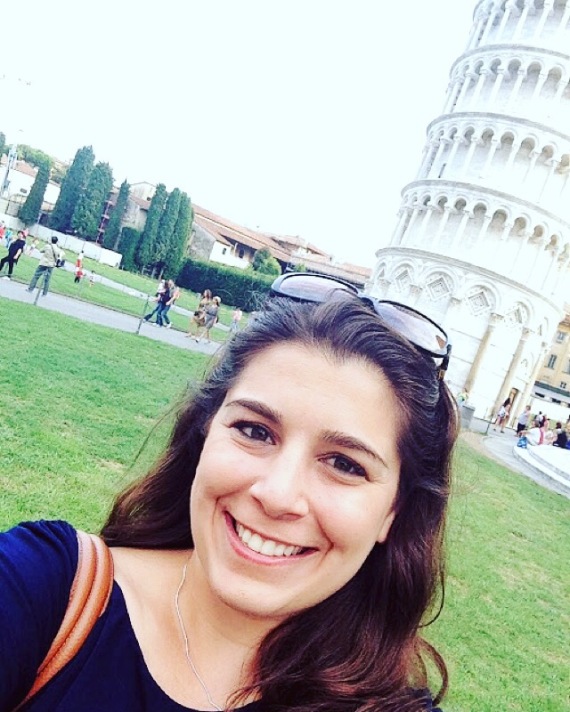 By the time Wednesday rolled around our feet were a bit worse for the wear and so I cut my original itinerary wish list down a tad to just what I considered the essentials: The Duomo (aka Santa Maria dei Fiore), Perfume Museum, Mercato Centrale, Ponte Vecchio, & the Boboli Gardens. Along the way, we did some souvenir shopping at the leather markets and painters stalls around the Duomo as well. 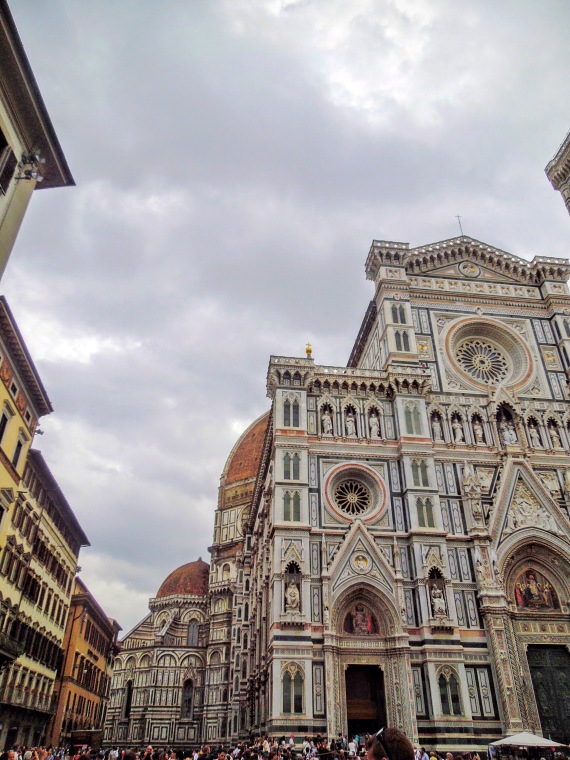 After completing the first half of our agenda for the day, we tackled two more of my friends food recommendations: Blueberry Steak at Acqua al 2 and gelato at Vivoli. Refueled for the afternoon, we headed across the Ponte Vecchio to Pitti Palace and the Boboli Gardens where I trekked up to the very top and was rewarded with a gorgeous view of Florence. While the views were definitely worth it, by the time I made it back down to the exit, my feet were seriously killing me (sneakers, while less fashionable, definitely would have been a far better choice than my gold flats) and so we decided it was time to head back to the hotel to freshen up before dinner. Originally, the plan was to head back into Florence for dinner, but instead I lucked out in finding a well reviewed restaurant not far from the Hilton Garden Inn. Dinner at Osteria di Poneta Novoli was the perfect way to end our time in Florence. They had delicious Tuscan food and since we were so close to the hotel we managed to make it to bed fairly early and get a good night’s sleep before heading off to Bologna!

Keep following all of my adventures in Italy by keeping an eye out for posts with the #ItalianSoiree2015!