Last Friday, I attended  the 3rd Annual Basket of Hope Fundraising Dinner, Auction, & Casino event.  Basket of Hope is a great charity which, as the name implies, strives to give hope to children diagnosed with cancer and other serious illnesses by giving them baskets filled with all sorts of fun items. As one of the children in a video shown at the event said, it’s not so much about the basket, but more about the fact that outside their hospital room are people thinking of them. 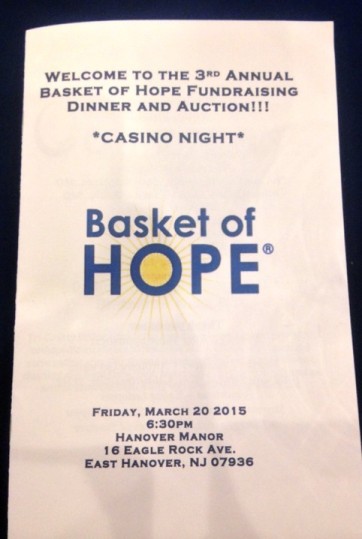 The event was put together by the New Jersey Chapter of Basket of Hope which serves the Children’s Hospital of New Jersey and the Children’s Hospital at Montefiore along with other local hospitals. It was held at Hanover Manor in East Hanover, NJ which was a very nice facility with a very friendly staff. They even had valet parking which was great because it was snowing.

After arriving, my friend and I stopped by the open bar for a cocktail and then it was time to take a look at the baskets and silent auction items. They had 26 gift baskets with a variety of themes including pasta night, vacations to the caribbean, and gift cards to local shops and restaurants. Out of all of the basket, the most popular non-vacation one had to be a lunch for four with wine pairing at Jockey Hollow Bar & Kitchen in Morristown, NJ. The silent auction also had a large number of items including everything from football tickets to Rutgers games to day passes for Disney World. 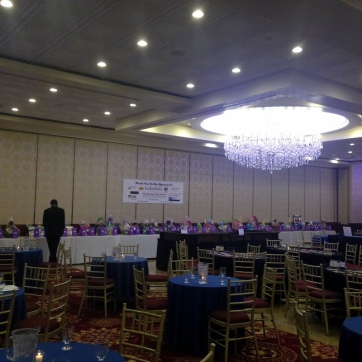 Once we had looked through all the baskets and silent auction items, it was time to grab a bite to eat before the casino portion of the evening began. The food was pretty good for banquet food. Instead of a sit down dinner, it was more heavy on appetizers with everything from a carving station to sausage and peppers to classic passed hors d’oeuvres like stuffed mushrooms and pigs in a blanket. While we were eating, those who had put together the event talked about what the money raised that night would go towards and how they got involved with the charity. After a video featuring some children who had benefited from the charity, it was time to begin the casino portion of the night.

While I don’t have another casino charity event to compare this to, I must say that I think they did a great job with incorporating the casino night into the raffle baskets. Everyone received $100 in “funny money” with their ticket to gamble with and had the opportunity to purchase more ($20 would get you $100 in funny money). At the end of the night $50 of funny money would be worth one raffle ticket. It was a great way to get everyone excited about playing the games even though they weren’t winning real money. Once we understood how everything worked, we decided to check out all our options. They included 4-5 black jack tables, 2-3 poker tables, two roullette tables, and one craps table. It was the perfect amount for the about 75 people in attendance. We decided to start out at black jack. After playing for about 15 minutes, the man running the casino night from Events Plus came by our table and said that anyone who bought $100 worth of funny money on the spot would receive an extra $200 automatically and additional $200 if anyone including the dealer got black jack during the next deal. Of course almost everyone took him up on his offer and we were lucky enough to have a black jack at our table and so everyone ended up with $500 in funny money for just $20. Overall, I must say I really enjoyed the casino portion of the night. Not being a big gambler, it finally gave me a chance to try out all of the games I had always been too intimidated by at real casinos. The staff from Events Plus were also fantastic. They were the first ones to fill you in on the rules or give you suggestions on whether or not you should hit when playing black jack. They also made sure to keep it fun by calling do-overs at the craps table occasionally to make sure people didn’t get discouraged. The 2.5 hours casino games were open flew by and before we knew it was time to cash out and get our raffle tickets. I ended up with $1500 in funny money which got me 30 raffle tickets. My friend ended up with a lot more tickets and put about half of them into the Jockey Hollow basket. While he didn’t end up winning that one, both of us, however, did walk away with a basket. I won the Chocolate Lovers basket which was filled with a variety of European Chocolates and my friend won a Pasta Night Basket, which had everything from dried pasta and sauce to oil & vinegar containers.

At the end of the night, everyone received a sugar cookie decorated with blue & yellow royal icing that I had actually made as a favor to one of my friends who was running the event. Each sugar cookie had a tag which said “Thanks from the Bottom of our Heart”, which I thought was a great & inexpensive way to thank everyone who came out. 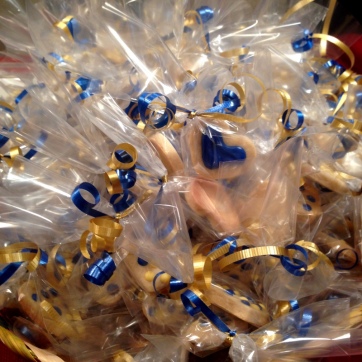 Overall, it was an incredible night for a great cause. I would highly recommend having your event at Hanover Manor and using Events Plus. And if you live in North Jersey, you should definitely keep an eye out next Spring for the 4th Annual Basket of Hope Fundraiser!